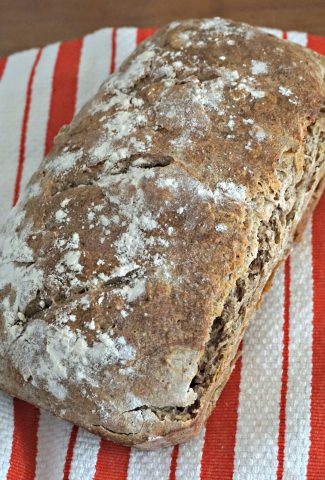 Is Making Bread a Chore or Passion?

I’ve been making bread for more than twenty years.  Not continuously, yet periodically in long spurts over the years.  As you might have noticed from my other recipes on this site, I love making all kinds of dough for pastries, pasta and bread.

Friends often ask why I bother to make my own bread.  Isn’t it time consuming and difficult?  Yes, I respond, it takes time and requires a certain amount of skills.

Nevertheless, almost nothing feels more rewarding than making your own bread.   After making bread a couple times, the feeling of reward will turn into passion that will override any feeling of chore.

There are thousands of guides to making bread.  Explore more than 1400 recipes on my Pinterest Board Bread for All Occasions! to get ideas for your own bread making.  Read this Trustworthy Sourdough Bread recipe to discover how to make this delicious healthy bread.

At the time of publishing this article, the top three selling bread-making books on Amazon are:

Most cookbooks will describe the bread-making process and include several recipes for preparing different types of bread.  Although there are many similarities from book to book, there are also subtle differences as bread-making is really a very personal process.  Each baker has their own touch learned from experience.

With practice, you too will create your own process for making bread.  You will develop your own instincts to guide you through the various stages.  Hopefully you will start trusting your instincts and enjoy making bread.

Instead of trying to compete with all these available resources, I will simply describe briefly the bread-making process so you can appreciate the joys of making your own bread and discover how little active time or skills is actually required.

Using your hands to mix the dough is a lot of fun.  It’s brings you back to kinder days when you played with Play-Doh or Silly Putty.

Although you can use a professional food processor or electric mixer to make pretty much any kind of dough, I’d recommend using your hands when you begin.  This way you will learn how the dough feels at each stage.

As you become more experienced working with dough, you will start feeling when the dough is ready for fermentation.  Fermentation is the process during which the dough rises.  Some call the rising phase bulk fermentation or bulk rise.

Once you master making dough by hand, you can try, if you prefer, making the dough by an electric mixer or food processor.  I often use my Cuisinart Food Processor  to make pie crust because it’s really easy and quick.  Yet, I still enjoy making pastry dough by hand and usually prefer making bread by hand.

Hopefully after a couple times making your own bread, you will be able to trust your newly acquired instincts to guide you through the mixing, bulk fermentation, and baking steps.

Making bread does not really take very much active time.  Most of the time required to make bread will be during the rise and baking phases.

In about twenty minutes you will mix your yeast and flours, knead the dough for the first time and then set it to rest.

During this first rise (bulk fermentation), which may take a couple to several hours, you don’t have to do anything.  You can even leave your home to do errands.

If you are making slow-rising doughs, such as sourdough, you can even sleep overnight or go to work for the day while your dough rises the first time.

After the first rise, you will generally knead the dough gently and then prepare it for a second rise.  Some people don’t recommend kneading the dough at this stage. Rather they suggest splitting the dough and arranging each portion generally into its final baking form.  Generally you will spend about ten to fifteen minutes at this second stage.

The number of rises your dough will need depends on the type of dough you are making and the yeast you use.  A fast rising yeast may benefit from a second knead and rise so the gluten can develop and the dough’s flavor mature.  A sourdough, on the other hand, requires a very long and slow first rise so that the sourdough starter can activate the rest of the dough.  A second rise is not always needed when making sourdough bread.

Prepare the dough for the oven

You can also prepare the appearance of the final result by spreading a little flour, seeds, salt or other items on top.  You may even brush on some butter, milk, beaten eggs or other liquid on top to improve the crust.  At most this final stage will require ten minutes of your time.

While the bread bakes in the oven for thirty to fifty minutes, the delicious smell of bread will permeate your household.  In the winter, the smell of fresh baking bread is comforting, reminiscent of a time when your ancestors baked their bread daily for the family.

You have probably heard that the bread is baked when you hear a hollow sound when tapping on the bottom of the bread or on the bread pan.  I don’t always find this method reliable, especially if you bake your bread in a thick pan, such as a cast iron pot. 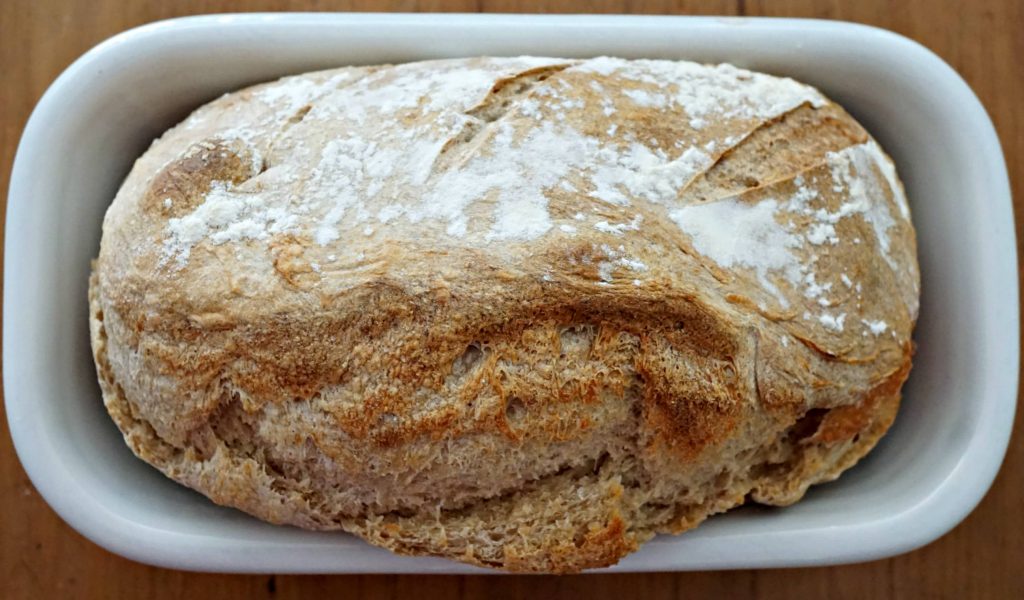 If you bake your bread without a bread pan, I know the bread is ready when the crust is medium to dark brown.  When you use a pan, you also want to make sure that the bread is starting to separate from the side of the bread pan.  Sometimes, you may wish to remove the bread from the pan to bake about five to ten minutes longer so the sides can also turn brown.

Waiting after baking the bread

If you try to remove the bread too soon from the pan, some of the bread might stick to the pan.  Naturally, use a knife to slide around the sides of the pan to help avoid the bread sticking to the pan.

You can make it easier to remove the bread from the pan by using baking paper to line the pan.  Then you can simply lift the paper out of the pan after waiting at least ten minutes.

Sometimes I use loaf pans that have all the sides collapse after unhinging them.  Such a pan definitely makes it easier to remove your loaf.  However, a pan with collapsable sides is not wonderful with a wet dough as it might leak through the cracks.

Ways to eat your bread

Almost nothing is more satisfying than a toasted slice of bread with butter spread on top.  Everyone has their own way they enjoy bread.  Personally I love spreading butter and honey on top of my toasted bread.

I also enjoy avocado toast.  Long before avocado toast became a trend, I smashed some avocado across toasted bread and then added a drizzle of olive oil, some minced fresh garlic, and sea salt on top.

Homemade bread, unlike store-bought bread, will start molding if not consumed within a week or so.  It will keep longer if you store your bread in a bread box.  Recently I bought this one for approximately twenty dollars:

At the same time I also purchased a pair of natural linen bread bags to help homemade bread retain its freshness.

I am so happy with these bread bags.  Lately I’ve been making a lot of sourdough bread.  A loaf of sourdough bread stays fresh more than a week in a linen bread bag inside a bread box.  The bread might start feeling a bit hard.  Yet, when you slice the bread and toast it, the bread will taste as fresh as it did on the first day.

If you cannot eat all the bread within a few days, you might consider freezing some of it for later consumption.  It’s best to freeze the bread quickly before it begins to spoil. However, you must wait at least four hours before putting fresh-baked bread in the freezer.

I usually make too much bread, which means I can either freeze it or share some with a friend or family member.  Believe me, everyone loves receiving some fresh-homemade bread!

So spread the pleasure of making bread by giving some of your homemade bread to your friends.  Or ask a friend to come join you to make bread together.

I hope that you will forward this guide to your friends.  I’d love to see photos of your creations and read your comments on your experiences.

How did I not know that @gwenla has full lunch ser