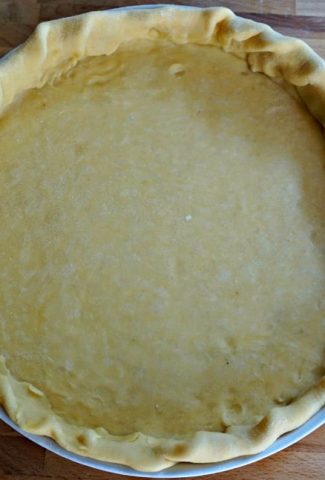 What is Pastry Crust?

As there are many different names to describe the same pastry crust, it can be confusing to most of us when reviewing recipes.  A new baker may think there are actually dozens of different types of pastry or pie dough.  In fact,  however, the ingredients for a flaky pie crust and a mealy pie crust are mostly the same.

It’s the size of  the fat in the dough that will determine if the dough will bake into a flaky or mealy pie crust.  Larger pieces of fat left in the dough will generally cause the baked result to be more flaky.  So if you want to prepare a more flaky crust, stop mixing the flour with the fat (butter, oil, or shortening)  when the lumps of mixed dough are about the size of a pea.  If you mix the flour and fat until you have a more fine mixture, the fat will be spread more uniformly and cause the baked crust to be more dense and crumbly.  Many variations of crust between flaky and mealy exist, making it even more confusing for all of us.

In the United States the recipe described below would be for a pastry crust or pie crust, while in the United Kingdom it would be customarily known as a shortcrust and in France a pâte brisée.  Different names again for a similar result.

This Pastry Crust recipe can be used for all occasions!

I have tweaked other pastry crust recipes to come up with one recipe that has never let me down!  I prepare it as described in the recipe below for savory dishes, such as quiches, appetizers,  small or normal-sized hand-held pies, or anything else for which you’d use a pastry crust.

Yet, if you want a pastry crust for a dessert or sweet dish, just add an extra tablespoon or two to the recipe and follow all other instructions.  Now, you’re ready for pies and other sweet delicacies! You can add up to 1 1/2 ounces / 50 grams of ground nuts to your recipe by substituting the same quantity of flour and reducing the amount of butter used in the recipe by about 1 teaspoon / 10 grams.

This pastry crust recipe usually results in a crust that is between mealy and flaky.  In short, it’s a universal dough that can be used for many occasions.

Feel free to create your own special crusts by adding a teaspoon of any herbs or spices that would complement your dish. The exact quantity of herbs or spices will depend if they are fresh or dried and the type you use, as some are stronger than others.

I will be posting other recipes for crusts that are vegan and /or do not use butter.  Keep your eye out for these recipes.

I hope you will enjoy this recipe.  Please give me your feedback in the space below as I’m always interested in hearing your suggestions. 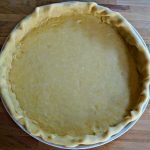 A pastry crust (pâte brisée) for all occasions, both savory and sweet. This recipe makes about 420 g of dough, which should prepare 1.5 9" (23cm) pies. It's calculated in this way because it requires 1 egg yolk.
Prep Time15 mins
Total Time45 mins
Course: Dessert
Cuisine: International
Servings: 1 pies
Author: Belgian Foodie
Metric - US Customary

By food processor and by hand

Use only the egg yolk to make the dough for the crust, but save the egg white for brushing on the crust before filling it, as indicated above in the recipe.