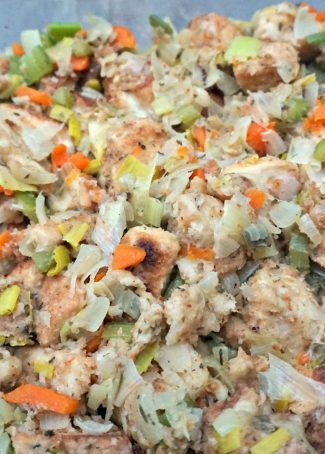 If you are like me on Thanksgiving Day, you somehow suddenly become a master multi-tasker.  Preparing several dishes at a time, making sure the oven is constantly filled with dishes being cooked in a pre-determined order, and decorating the table and dining room for the main event:  Thanksgiving dinner.  In all this chaotic order it’s welcoming to have some dishes that remain simple, without any extra fuss.

My Simple Stuffing recipe is exactly what is needed.  It has the all the main ingredients (bread, celery, sage, vegetable broth), along with some others that can be adjusted by you.  Feel free to stay faithful to this recipe or to let it merely be a starting point for your own inspiration.  Let this Simple Stuffing recipe help you become centered in the midst of your hustle to prepare dinner.

This Simple Stuffing recipe is also vegan.  If you have vegan guests, cook the stuffing over a stove and then bake it in the second phase.  This way, your vegan friends can enjoy the stuffing and other vegan side dishes while others eat the turkey.  However, you can also add a little milk with eggs before baking the stuffing if don’t mind it being vegetarian.  Read the notes below in the recipe for suggestions and options.

The dish of Simple Stuffing in the featured photo above was taken before putting the dish into the oven to bake in the final round.

Enjoy the simplicity of this stuffing.  Share this recipe with your friends so they can also enjoy the ease of this dish. 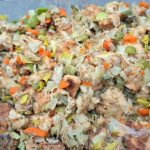