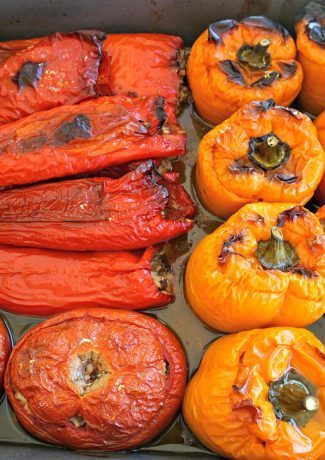 What Makes this Recipe for Greek Stuffed Peppers and Tomatoes Genuine?

Months ago my friend, Diamantis, described how his wife, Thomais, made the absolute best Stuffed Peppers and Tomatoes (in Greek known as Gemista).  In fact, his accolades of his wife’s wonderful cooking and his invitation for me to come learn at her side first gave me the idea to embark on my Journey to Greece.

Why not spend time in Greece learning local and family recipes from such a good cook?  I’d enjoy some long-deserved vacation while gathering materials for my blog.  Ok, twisting my arm was  perhaps not so difficult.  I was certainly a willing participant.

Since I arrived last month, Thomais has been kindly showing me some of her recipes.  Fortunately I’m staying a couple more weeks so will be able to still learn a few more recipes before I leave.  Or as I often joke with Diamantis and Thomais, maybe I’ll still be here at Christmas!  They have definitely made living here in Xanthi and in Greece very attractive.

Thomais herself has certified the authenticity of this recipe for Greek Stuffed Peppers and Tomatoes.  She promises it’s a recipe she’s learned from her mother and other fine cooks in Greece.  Now with her permission I’m sharing it with all of you.

Why are Stuffed Vegetables such a Regional Phenomenon?

In countries in Central and Eastern Europe, the Caucasus, the Mediterranean region as well as in the Middle East, families make stuffed vegetable dishes all year long.  Cabbage in the winter; peppers, eggplant, zucchini and tomatoes during the spring and summer;  and mushrooms and squash during the fall, to name the most common.

One of my favorite dishes growing up was my mother’s sweet and sour cabbage.  (I’ll have to share this recipe with you some time.)  However, it was not until later that I discovered the world of stuffed vegetables that I now adore so much.

Many recipes for stuffed vegetables seem to come from the regions mentioned above.  Other parts of the world also share such traditions.  Yet, when I view the few hundred recipes available on the Belgian Foodie® Pinterest board Stuffed Vegetable Recipes, most recipes come from those regions.  Check the recipes for yourself by following this link.

One reason stuffed vegetables are a bigger phenomenon in those regions is their deep-rooted tradition of gardening and eating the vegetables produced.  I’ve seen over the past weeks in Greece people receiving fruit or vegetables from a family member or a friend with a garden.  Even some restaurants source part of their vegetables and other produce from friends or family who grow these items themselves.

When you grow your own vegetables and all of a sudden have a large stock of peppers, for instance, you find a way to use them.  You use some peppers for your own dishes. Preserve others for future use by freezing, pickling or canning them.  And you give the rest away to friends and family.

How do you Prepare Stuffed Vegetables?

What Ingredients are needed for Stuffed Vegetables?

Families customarily use seasonal vegetables and fill them with local ingredients, such as grains, meat, other vegetables and perhaps nuts and/or fruit.  Some recipes contain cheese inside or on top of the stuffed vegetables.  Sauces may cover the top of the vegetables as they cook or as a cold addition at time of serving.  The herbs and spices used to prepare stuffed vegetables will vary according to regional and family preferences.  In short, locally-sourced ingredients usually find their way into this tasty and well-balanced homey dish.

You may also roll leaf vegetables.  Stuffed grape leaves, known outside of Greece as dolmas, for example, are an iconic Greek dish. While dolma originally referred only to stuffed vegetables, the term sarma described rolled leaf vegetables.  Nowadays the terms dolma and sarma are often used interchangeably to describe both stuffed and rolled vegetables.

Usually in less than an hour you can prepare and serve delicious stuffed vegetables to your family and friends.  For those of you wanting to plan ahead, you can make the filling in advance and then add it later when you prepare your meal.  Leftovers (if you have some) may be reheated and eaten in the couple days following your meal.

If you like, serve these cooked Greek Stuffed Peppers and Tomatoes with some crumbled feta cheese or with a modified tzatziki sauce (basically a tzatziki sauce without garlic) to add on top of the cooked vegetables.  However, stuffed vegetables served without anything on top will be completely tasty.

Please share this recipe for Greek Stuffed Peppers and Tomatoes with your friends so they can also enjoy this traditional comfort food. 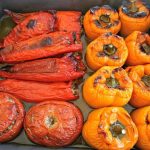