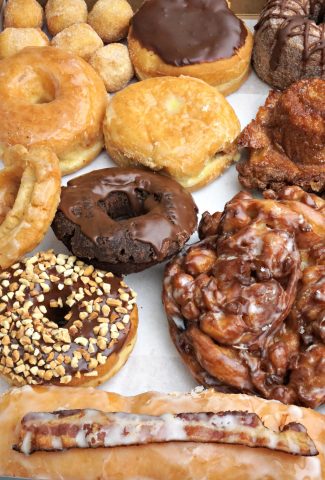 The past few months I have enjoyed discovering my new neighborhood: Hollywood, California.  Although I grew up in Los Angeles, I have not lived here since high school several years ago.

Part of moving to a new city is finding new favorite places to eat, shop, drink coffee, and take walks.  My brother has recommended many places, while I’ve found others on my own.  It’s helpful receiving his suggestions, yet it’s fun to find places that I can call mine.  I’m still exploring my new surroundings and loving the adventure.

As you can imagine from the tasty and healthy theme of my food blog, doughnuts are not my usual breakfast or snack.  However, my son who is finishing a Master’s in Management in Brussels is a bit obsessed with doughnuts.  He’s even exploring ways to market them in Europe.   In a couple weeks he’ll be visiting me in Los Angeles.  I’m therefore already scouting the top local donut places to show him.  My donut tasting is thus for educational purposes.

I learned that Kettle Glazed Doughnuts apparently has the best coffee as well as the best cold-brew coffee of any donut shop in Los Angeles.  Not having tried the coffee in all the local donut shops, I’m not able to confirm this claim myself.  You will therefore have to try Kettle Glazed’s coffee to assess it for yourself.

Although Kettle Glazed’s cronuts (a cross between a croissant and a doughnut filled with cream) and cruffins (a cinnamon-sugar doughnut baked in a muffin tin) help Kettle Glazed Doughnuts draw in customers, their traditional doughnuts probably keep them coming back.  Their friendly staff and good coffee certainly also give customers a reason to return.

I selected a dozen doughnuts to try Kettle Glazed’s wide range of doughnuts.  Except as otherwise noted, you can see below photos of the doughnuts selected:

I took all the doughnuts back to my home to try them.  Ok, it’s probably not the best lunch idea I have had these past months.  However, it was definitely the most decadent and indulgent!  Fortunately a couple people helped me taste the doughnuts to save me from myself.

As we tried the doughnuts my brother shared with me a story about one time he went to Kettle Glazed Doughnuts.  When he arrived at the shop, he sadly discovered that they had no more jelly doughnuts.  He mentioned his disappointment to the woman serving him.  She told him to wait a couple minutes and she’d make him one.  Shortly afterwards she handed him a freshly made jelly doughnut still very warm.  He devoured it quickly and still considers it as one of the best doughnuts he ever had.  It turned out the kind woman was the owner of Kettle Glazed Doughnuts.

I enjoyed all the doughnuts tasted. Yet, I loved most the apple fritter, the cruffin and the buttermilk old fashioned bars.  Apple fritters and buttermilk doughnuts are among my favorite doughnuts anywhere, so I am able to compare these to numerous others from my past.  The cinnamon-sugar cruffin, which by the way are baked instead of fried, reminded me a bit of cannelés, a yummy French treat.

I’d recommend both the vegan and gluten-free doughnuts if you have dietary restrictions or even if you don’t.  They are tasty and even more moist than the traditional doughnuts.

How Can you Get Your Kettle Glazed Doughnuts?

If you are near Hollywood, I would recommend you visit Kettle Glazed Doughnuts and pick up an assortment of doughnuts to share with your friends.  If you are not near Hollywood, you will be happy to learn Kettle Glazed Doughnuts is very close to the Vine / Gower Street exit on the 101 Highway, making it easy to hop in on your way somewhere else.  However, you can also have their doughnuts delivered to you via Postmates for only a couple dollars more.  I believe they may even deliver large orders for free in their neighborhood.