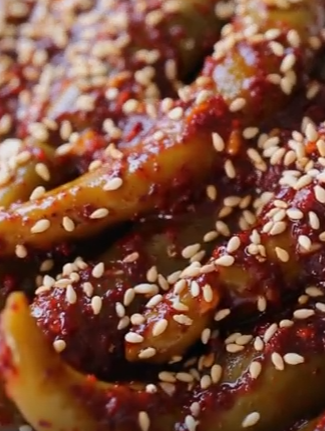 Why I love Korean Food Best

If there’s one Asian cuisine I love, it would have to be Korean food.  Korean dishes have a distinct flavor and spice.

The variety of their side dishes is also great!  So many to choose from! Not only can you use the side dishes as appetizers, but you can also eat them alone or with a little rice.

One Exceptional Side Dish

My favorite side dish is probably Korean Style Green Chili Pepper Pickles, also known as Gochu Jangaiji. They are fermented and seasoned with vinegar and soy sauce.  After about a week of fermentation, they make an ideal side dish for rice or any snack.

With their sour note and spicy flavors, Korean Style Green Chili Pepper Pickles are a must try!

Enjoy the pickled peppers with rice or add some to your bibimbap, mixing it in with other seasonings and spices for a better kick!  Or, you can eat them alone as an appetizer before (or during) the main course.

This recipe has been kindly contributed by Claire Ruiz, the author of Sumo Chef.  Check out other recipes and articles by Claire on  Sumo Chef. 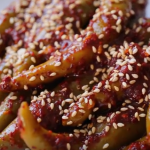