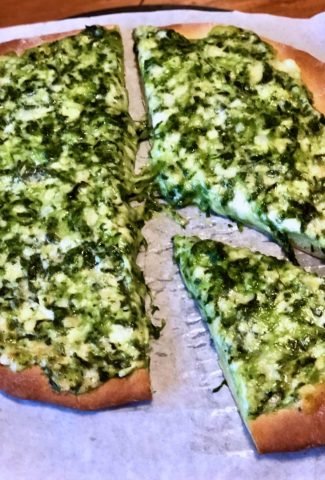 What is a Swiss Chard Pie?

It’s a pie in the same sense that pizzas, quiches and other similar savory dishes can be considered a pie.  It starts with a layer of dough on the bottom, then is topped with a mixture of Swiss chard, parsley, onions and cheese, and finally is baked in the oven until golden brown.

What Inspired this Unique Dish?

I have Georgian and Belgian cuisines to thank for inspiring me to make this super delicious combination.  When I say Georgia, I mean the Causcasus country, not the US state.

Last spring I had the pleasure of meeting Carla Capalbo at an International Association of Culinary Professionals (IACP) conference.  Carla is the author of a wonderful book, Tasting Georgia:  A Food and Wine Journey in the Caucasus.  One of the first recipes I made from this book was the Georgian specialty cheese bread called khachapuri.  You can read more about both the book and khachapuri  in this post.

The dough for this Swiss Chard Pie with Parsley and Cheese was largely inspired by Carla’s recipe for khachapuri. However, where khachapuri is a folded bread, in this recipe the dough is rolled out like a pizza and the vegetable-cheese blend spread on top.

Nivelles, a town about a half hour south of Brussels, is famous for a delicious local specialty called tarte al d’jote made with Swiss Chard and a kind of cream cheese only made in Nivelles. Surprisingly this pie can only be found in and around Nivelles. This uniquely semi-pungent cheese has roots back to the 13th century in Nivelles.

Fortunately for me, I spent a year in Ecaussinnes, a small town near Nivelles. Tarte al d’jote therefore starred at numerous buffets, suppers and lunches over the years. It is customarily served warm, sometimes with a little butter spread on top.

When I first tasted the khachapuri bread made from Carla’s recipe, I loved how easy it was to make the dough and how soft it turned out. Something about the first bite made me think of tarte al d’jote and how fun it would be to try adding some vegetables, mushrooms or other ingredients to this classic Georgian bread.

I therefore made it again with some new touches. At first I folded the dough over the filling, like for the khachapuri, but found each bite slightly rich. Thus by rolling the dough out like a pizza with the chard-cheese mixture on top, the balance was perfect!

The dough is so easy to make. It takes only five minutes to mix and another thirty minutes to rest before rolling it out. It is still a little soft so you can substitute the dough suggested in the recipe with a pâte brisée dough if you prefer a slightly harder or chewier crust.

How to Serve Swiss Chard Pie with Parsley and Cheese

Heat the pie before serving it to your guests. A little butter spread on top when it comes out of the oven adds a nice touch.

A slice of Swiss Chard Pie with Parsley and Cheese accompanies a salad or a bowl of soup for a light meal. Yet, it’s also wonderful as an appetizer with drinks or as part of a party buffet.

Any way you decide to serve this pie, your guests will find it surprising and tasty. No one will ever guess the ingredients of this pie and will be shocked when you tell them there’s Swiss chard and parsley.

Enjoy a Swiss Chard Pie with Parsley and Cheese soon with friends and family. Then come back here and share your feedback. 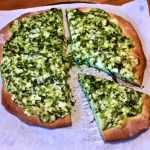