What makes these Sesame Noodles my go-to dish for lunch?

The Ease of Making Sesame Noodles

Working at home has several benefits, including an easy commute to work and dressing sporty casual every day of the week.  My favorite benefit, however, remains being able to prepare tasty healthy lunches in less than 30 minutes.

Over the years I’ve tried many variations of salads, soups and pasta dishes.   They make wonderful one-course meals that fill me up enough to hold until dinner time, with only a few apples in between.   If I am in a super hurry, I’ll make a sandwich, omelette or quesadilla.

One of my go-to lunch dishes is cold Sesame Noodles.  My cold Sesame Noodles has all the flavor of the restaurant version, yet has so much less fat and sodium.  I also try to throw in some veggies, such as slivers of carrots, zucchini, cucumber, bell peppers or whatever else I have on hand.   I don’t put in all these veggies at one time, yet do often put in two kinds of vegetables along with the mandatory diced green onions.

The Lovely Taste of Sesame

Sesame is one of my favorite tastes, especially when mixed with a little honey.  A little sesame paste, known in many countries as tahini, spread with honey on toasted bread, pita or tortilla is heavenly for breakfast, a snack, or part of a lunch.

About five years ago I purchased a snack on Kalcin Sk, a street behind the Spice Market (Misir Carsisi) in Istanbul.  This snack remains one of my most vivid gustatory memories.  In one of the food stalls located on Kalcin Sk I tried a thin pancake with a mysterious mixture resembling sesame paste and honey. I’m not sure what the exact ingredients were in this delicious treat, despite many attempts to recreate it.  Nevertheless, every time I eat sesame and honey together I relive those joyous moments in Istanbul.

This Sesame Noodles recipe contains only a small amount of honey, yet is not any less yummy.   Please consider this recipe a starting point.  You can add some ginger, garlic, chili flakes or fresh coriander (cilantro) to create your own version.  If you want more protein, simply add slices of grilled chicken or tofu on top.

Use the social media links below to share this recipe with your friends.  Come back to add your feedback and suggestions in the comments below. 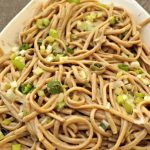