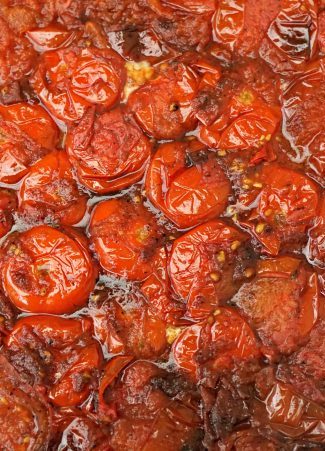 What is a Tarte Tatin?

You have probably heard of Apple Tarte Tatin (tarte tatin aux pommes), the French version of hot apple pie.  Slices of apple caramelized in a pan on the stove or in the oven before placing puff pastry dough on top and baking it further.  Before serving the pan is turned over so the pastry is on the bottom and the hot caramelized fruit on top.

Although tarte tatin is often made with fruit, a savory version made with vegetables can be just as delicious.  A few months ago I shared on this site my recipe for Belgian Endive Pie, another delicious savory combination.  At that time I also made a Tomato Tarte Tatin (see photo below).  However, I wanted to work on the recipe a little more before sharing it.  It needed a few adjustments.

Last Sunday I invited some family over for a casual lunch.  I decided to try again the Tomato Tarte Tatin to serve with a salad.  What a simple elegant lunch that looks like it takes more time and effort than it actually does!  Isn’t that our goal when hosting friends and family?

I also used three types and sizes of tomatoes (medium vine-ripened tomatoes, cocktail tomatoes and cherry tomatoes) so that the tomatoes would fill all the spaces on the pie.  Last time I made the Tomato Tarte Tatin I used only medium vine-ripened tomatoes, which left too much empty space on top of the crust and caused the tomatoes to move around a bit.  See photo above with the Belgian Endive Pie and compare with the photo below.  Using different sized tomatoes resolved these problems.  Feel free to experiment with different varieties of tomatoes and arrange them as you like.

Adjusting the Menu for Extra Guests

When my guests arrived I discovered that we would be six to share the meal instead of only three.  What to do?  Fortunately, it’s family so no real worries about last minute preparations.

As I still had some dough left over, one of my Belgian sisters and I teamed up to make a quiche with bacon bits, leeks and grated cheese.   (I will share this recipe in a separate post). We ended up having enough ingredients to make one large and one small quiche.  The quiches were thrown together with love as the Tomato Tarte Tatin baked in the oven.  We also prepared a simple salad with butter lettuce, tomatoes and shallots.  We placed the quiches in the oven as we removed the Tomato Tarte Tatin.

We cut the Tomato Tarte Tatin into eight pieces, dishing out one piece to each of us as an appetizer.  We each took a bite from our plate and then passed it to the right so we could each try all variations and compare our notes afterwards.  Passing the plates around while taking a bite made this appetizer course much more fun and intimate.  In French, you’d call this experience as being convivial, which is often used to describe an event where food is shared among the guests at a table, such as fondue, raclette, or other family-style dishes.  After we finished the six pieces we then shared the last two to make sure we tasted all variations.

At the end, we shared our comments about each variation.  We seemed to agree that the slices with the Parmesan cheese and the Danish blue cheese were the most tasty, along with the slices without any added topping.

Of course, you can try other strong cheese which crumble, such as feta or Roquefort.  Be adventurous and try your own variations.  Some people caramelize onions or other vegetables to add with the tomatoes.  You can also add some dried or fresh herbs, such as rosemary, thyme, oregano or sage to the tomatoes to round off the flavor, yet none is really needed.

Afterwards we enjoyed the quiche with a simple salad.

Try the Tomato Tarte Tatin on its own or alongside another savory pie, such as the Belgian Endive Pie or a quiche.  Serve it on its own or accompanying a soup or salad. For more ideas, click on the link to find recipes for more than 100 Quiches and Savory Tarts! on Pinterest.   Remember to share the joy by forwarding the link to this post to your friends.  I’d love to read your comments below.  Bon appétit! 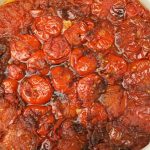